Sorry for taking so long.. I've been quite busy with school and stuff.


In early September, we went to Whitewater Lake with Christian Artuso. Thank you Christian for taking us!

Whitewater lake is quite a distance away, over a three hour drive. Whitewater Lake is a pretty large lake, for very southern Manitoba. It has dried up several times, but now it is getting deeper, and floods far beyond the range of the actual lake. It floods fields and creates perfect habitat for shorebirding.

Some of the roads on the map are very flooded, and are not adequate for means of transportation by a vehicle that is not meant for off road. Some of the old farm roads just lead through a sea of shallow water.

We hiked a kilometer up a farm road, where the van could not go. We saw one or two Black-crowned Night Herons.


We continued on to another region of the lake. White-faced Ibis was one of the species on our list we want to see. After a while, we finally saw one!


Here is a flock of avocets, and Long-billed Dowitchers.

This is one is a juvenile dowitcher. Almost all of them were fall plumage.


Then we came to deeper water, where there was coots.... lots.. and lots of coots. Thousands of American Coots. There were also grebes, and other ducks.

And this kids, is why you need to get your driver's licence. ;) 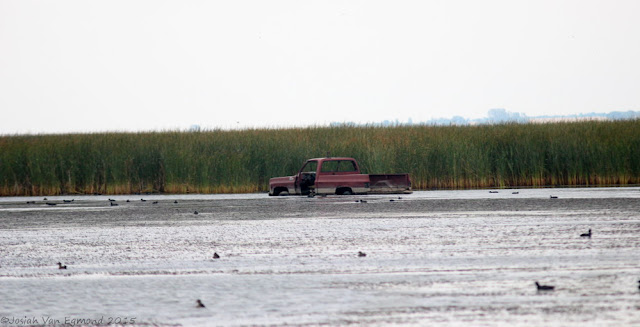 Great Egret was another bird we wanted to see. And we saw a few, very far away. Then, later, we found a few more, a bit closer, so we could make out something other than a tiny, tiny blotch of white.

Another bird on our list was Cattle Egret (we saw a lot herons). We were successful with almost all the birds we wanted to see. We found some Cattle Egrets among the cattle (there was a reason they got their name).

Thank you again Christian, for taking us to Whitewater Lake, and helping us with identification! It is really helpful!