This is the third post covering my 2017 Birdathon experience.

We followed through with our plan to go to the Shoal Lakes (west, east and north), which are north west of Oak Hammock Marsh.

The raptors were slow at first, but throughout the day they added up.

After the 45 minute drive we made our first stop at the lakes at East Shoal Lake. It was a road that just ended at the edge of the lake.
There we were able to see Common and Forster’s Tern, Franklin’s Gull, Red-breasted Merganser.


We continued around the lakes, making periodic stops to scan the water for birds. Our list of birds slowly grew until we had seen almost all of the waterfowl that are commonly seen around here. The roads were dry and dusty, the vehicle would kick up a storm of dirt behind us wherever we went. We would often stop and forget to close the windows, so the dust would come into the car. By the end many things had a fine layer of dust on them. My lips were dry and stung.


When we navigated around closed and rough back roads we made it to West Shoal Lake. There we saw numerous Great Egrets and plenty of pelicans, waterfowl and a beautiful Black-crowned Night Heron. We stopped at some Red-headed Woodpecker habitat and had a fleeting look at one. By now our list was over 90 and we wanted to break 100. 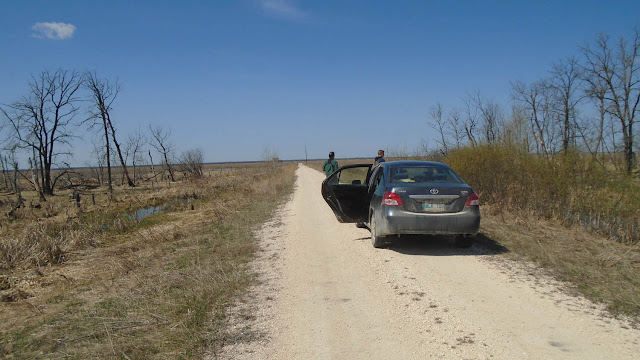 We finished up at the Shoal Lakes around 3 in the afternoon and began to head back in the direction of our house. We made multiple stops to try for Red-headed Woodpecker again, and Grey Partridge near Oak Hammock but it was unsuccessful for more species. After a quick stop at our house we went to Silver Springs Park to see if we could garner a few more species. Although there were many nice birds they were all ones we had previously seen that day.

Christian had to leave us, but I still saw a Pine Siskin and Cooper’s Hawk around at our house. I went down the road where I knew where some good feeders and fields were to see if I could get a goldfinch or bobolink, but it seems it was to early, because it was unsuccessful. I went to Silver Springs and the Red River Floodway once more in a last effort to try and see Osprey, Solitary Sandpiper or American Pipit, but that was also unsuccessful.

However, the Cooper’s Hawk and Pine Siskin put us over with a total of 101 species! Overall it was very successful, especially considering the time of year.

And that just about sums up my 2017 Birdathon. You can go to my page HERE donate to support bird conservation. The funds I raise will go to the Delta Marsh Bird Observatory. Thank you for your support of birds! Happy birding!
Posted by Josiah Van Egmond at 6:30 AM

Hi again! This is the second part of a series of posts documenting my birdathon experience. This post will have plenty of photos and little writing as I'm throwing these posts together the day before we depart to Europe.

If you would like to support bird conservation you can donate to my page HERE and make the important part and purpose of the birdathon a success.
Thank you for your generosity, any donations are very appreciated!


Once we finished driving around the loop of Birds Hill Park, we headed to Oak Hammock Marsh. We stopped at the Lockport dam and added a few more species to the ever growing list, such as these pelicans.

This has been the second part of my birdathon. The third post will come out soon, covering the Shoal Lakes and the rest of the day!

Posted by Josiah Van Egmond at 6:30 AM

I´m sorry this did not post until now. It was supposed to post earlier this week, but for some reason it did not. I was only able to get onto a computer now. I am in Hungary right now seeing many new birds and having a lot of fun, I will attempt to post a few photos in the coming days or weeks.

Hello all! By the time this automatically posts we will be travelling in Europe, hopefully seeing many new birds. This is the first post in a series documenting my birdathon experience from a week or two ago. If you would like to support bird conservation you can donate to my page HERE and make the important part and purpose of the birdathon a success.

Many photos were taken by Matthew because was taking more pictures than me most of the time and he had the better camera. All of the photos were hastily edited for this post, as at the moment of writing we are busy getting ready.

The alarm goes off at 5:30. I get up, eat breakfast and get ready, making sure the camera and birding gear is in order. Christian Artuso arrives, at six o’clock. The sun has just risen and the birds are already out.
This is my third Birdathon. I would have had it a few weeks later when it is the peak of migration for warblers and shorebirds, but we will be in Europe at that time so we had to settle with it being earlier.

Bird expert Christian Artuso agreed to help me with my Birdathon once again, as he has in previous years. This year it was just Christian, my twin brother Matthew, and me who went on the bird expedition. We started with a quick walk around our property, picking up about 30 species. The common ones like Black-capped Chickadee, Red-winged Blackbird, Downy Woodpecker, Dark-eyed Junco, Mallard, White-throated Sparrow, etc…

We then hopped in the car and headed out to Birds Hill Park, a Provincial Park near our house. Because it’s the beginning, there were plenty of birds everywhere that were first of the day. We stopped at a habitat which looked good for sparrows. We were able to get some amazing views from the car of two nice Vesper Sparrows and a fleeting glance at an Orange-crowned Warbler (first warbler besides Yellow-rumped I have seen this year).


We saw multiple Muskrats in ditches along the road, which quickly disappeared underwater after we spotted them.
The purple finches were singing jubilantly and we saw one do a flight display right over us as we were stopped on the side of the road.

A beautiful first of year male Bluebird sat near a bird box in a field.
We then got out and walked in a field which looked like prime habitat for Lark Sparrows. Because of Christian’s expertise we were able to find a beautiful individual. A lifer!

At first it was sitting in a tree where it was behind the sun, rendering the photos overexposed and therefore not good. Fortunately it flew down to the ground which allowed for some nice pictures.

We continued around the Birds Hill Park loop, stopping periodically to look or listen for birds. And one stop Christian pointed out a Winter Wren singing. We tried for a while to get a decent look or photo of it, but it stubbornly stuck to the very top of the tall spruce trees, singing its heart out. 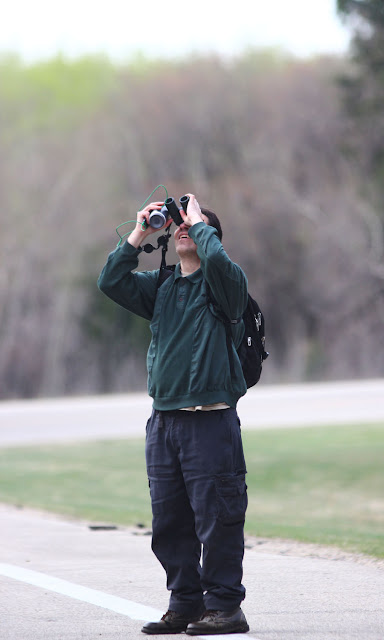 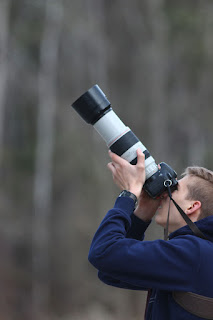 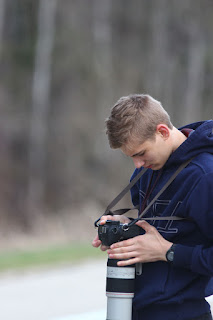 By this time we would have been birding for a few hours and garnered about 60 sp.
Stay tuned for more posts and updates from Europe!
Posted by Josiah Van Egmond at 6:30 AM

Leaving for Europe and My Birdathon Results

Hello all! Yesterday I did my birdathon, which is a fundraiser for bird conservation and research. Christian Artuso took me and my twin brother Matthew on a birding expedition for the day to try and see as many birds as we could. We just broke one hundred, totaling 101 species of birds, which is more than I was expecting considering it is not the peak of migration.

If you would like to support bird conservation you can donate to my page HERE and make the important part and purpose of the birdathon a success.
Thank you for your generosity, any donations are very appreciated!

And for some more exciting news, we will be leaving on a trip to Europe in a few days. We will be going to Rome, Hungary and Holland. I am planning to do plenty of birding along the way and get lots of pictures, so keep an eye out for posts in about a month. Because I will be gone for a few weeks, I will try to make some posts documenting my birdathon experience automatically post periodically when I am gone. I will also attempt to post some updates along the way if I find the time, so stay tuned!