Here is a Scarlet Tanager from the spring. It was a really exciting bird for me because of it's fantastic color. 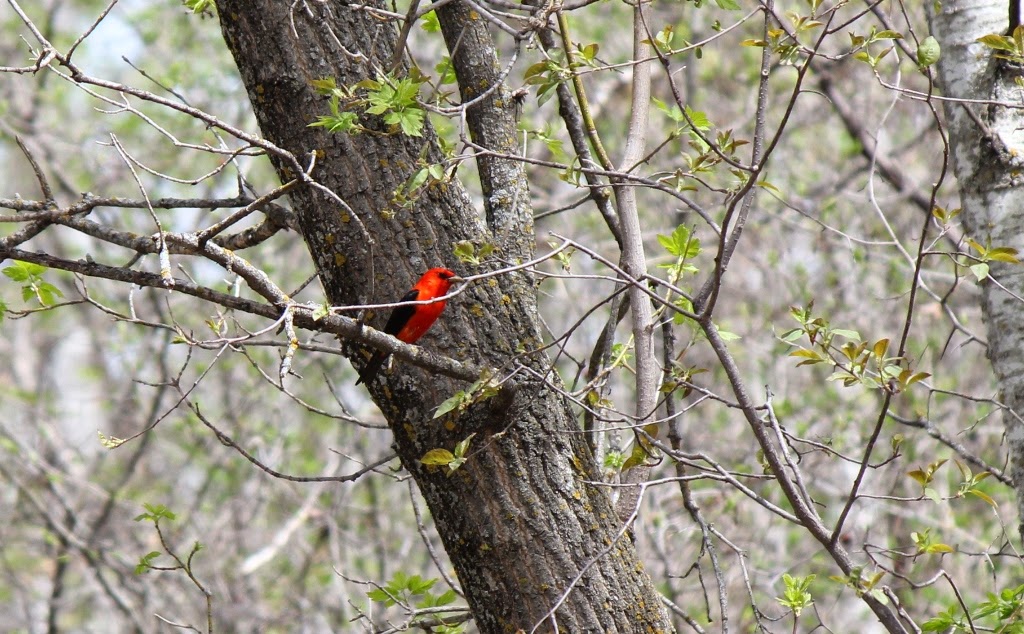 Can you guess this cropped picture?

Posted by Josiah Van Egmond at 8:39 AM


Here is a oriole we had this spring. We had a whole flock of them and I got some amazing pictures. Click here to see some of the other pictures I  took.


If you would like to join me for my W.W.B.W. leave a guess in the comments below or make your own weekly what bird post.

Can you guess this bird from last winter? 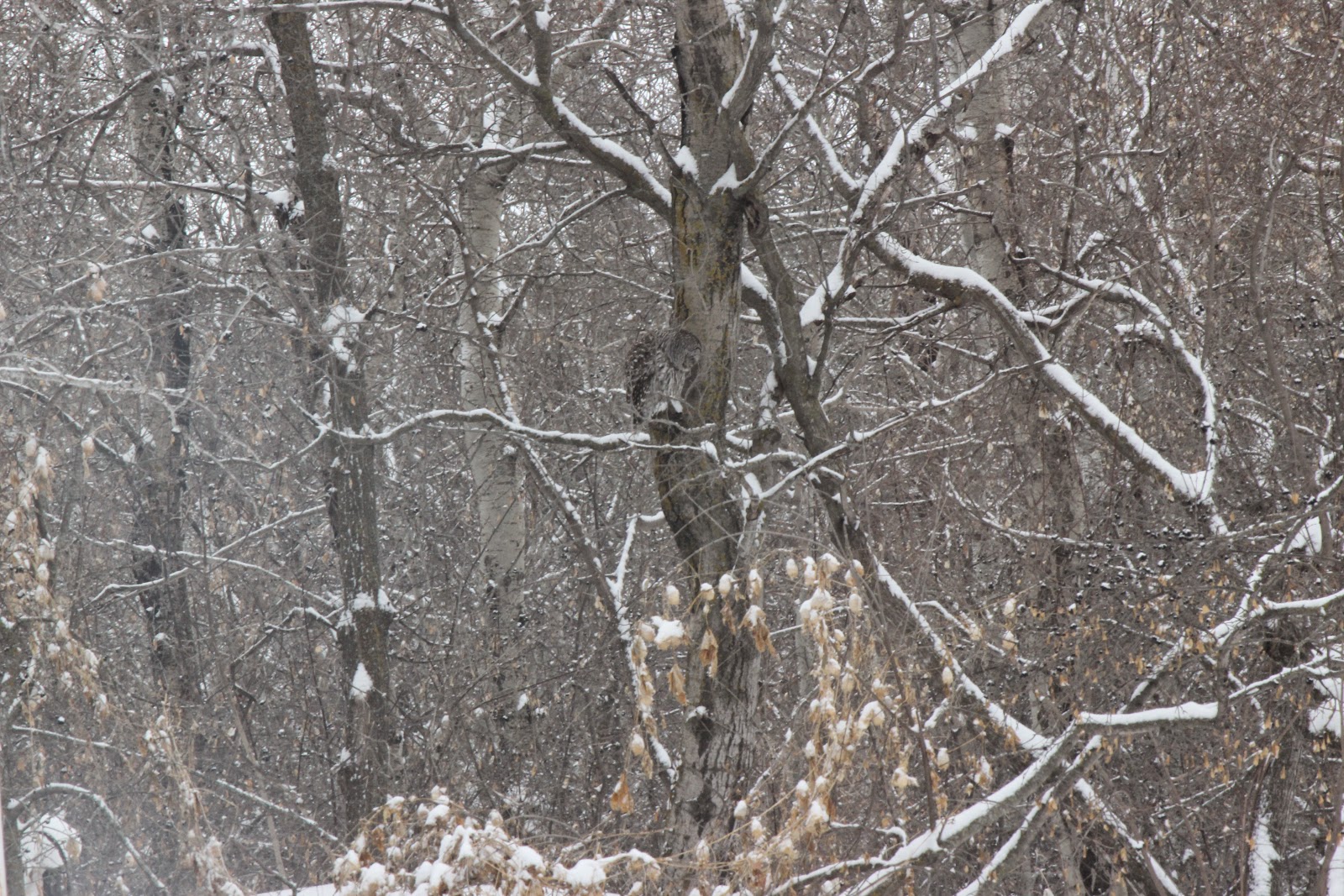 2 comments:
Email ThisBlogThis!Share to TwitterShare to FacebookShare to Pinterest

Can you guess this bird from spring? At first glance it blends in, but it should be pretty easy. 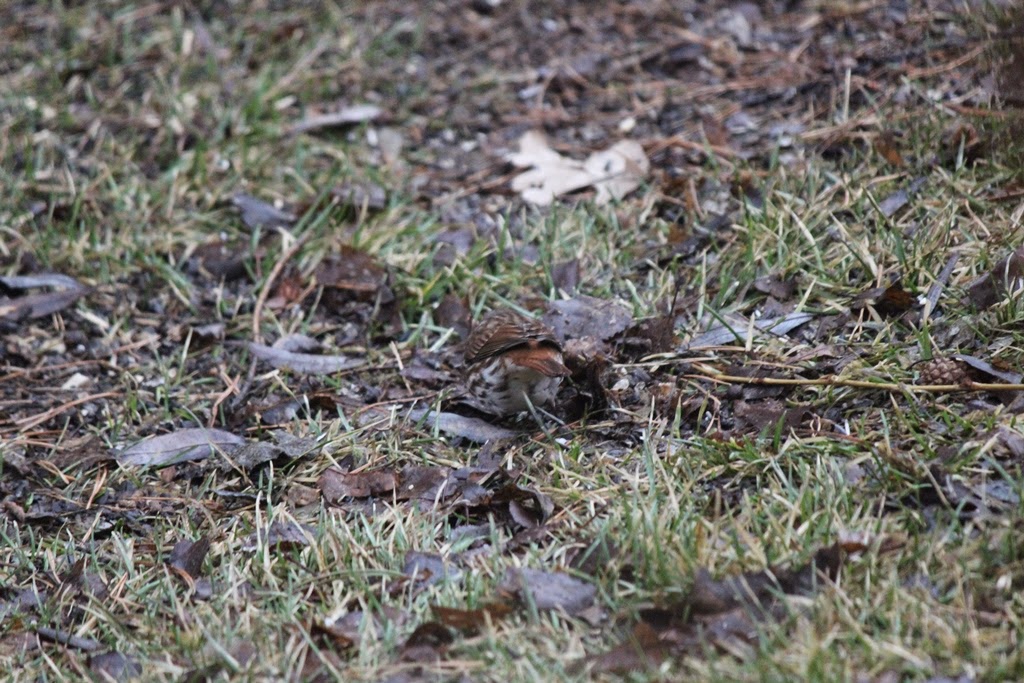 Congrats to Bridget and The Cats and the Birds on guessing last weeks correct, Northern Harrier.
Posted by Josiah Van Egmond at 10:56 AM

I had forgotten to add this picture in the latest Churchill post. It is three Semi-palmated Plover babies on a rocky beach, there is also a Arctic Tern sitting on a nest.

3 comments:
Email ThisBlogThis!Share to TwitterShare to FacebookShare to Pinterest
Labels: Feathers on Friday

Can you guess this hawk? I made is less quality or else it would be too easy.

Last weeks was a Grey Partridge.
Posted by Josiah Van Egmond at 11:30 AM

2 comments:
Email ThisBlogThis!Share to TwitterShare to FacebookShare to Pinterest
Labels: weekly what bird

Finally!!!  The second last Churchill post. It took a bit longer to get it out than I wanted. Now that school has started and stuff I haven't had as much time for my blog.
On the third day, we went for a long hike from Sloop Cove to Fort Prince of Whales. We saw a few lifers, including a Semipalmated Plover, which was one of the birds on our list. There were quite a few fossils in rocks scattered across the beach, which was interesting. There were also really cool rock formations and jellyfish!

We boated across the river in a zodiak, a five or ten minute ride. We saw a few belugas on the way. We landed on the beach and had to hike away from the fort, which was our goal, to go to Sloop Cove.

All in the rocks there were names engraved names of the people who came to Sloop Cove,
one of which was Samuel Hearne, the famous explorer

After exlporing the names a bit we went back towards the fort. We saw many jellyfish, over 30. Our guide said this year the polar bears and jellyfish are very numerous.

We found some cool fossil rocks on the beach

This is a really cool rock, with the splotches of white.
I saw a small bird fly across the beach. The guide said it was a Semi-palmated Plover! As soon as it landed I was able to get a clear look at it and the single black stripe across it's chest made it clear that it was. 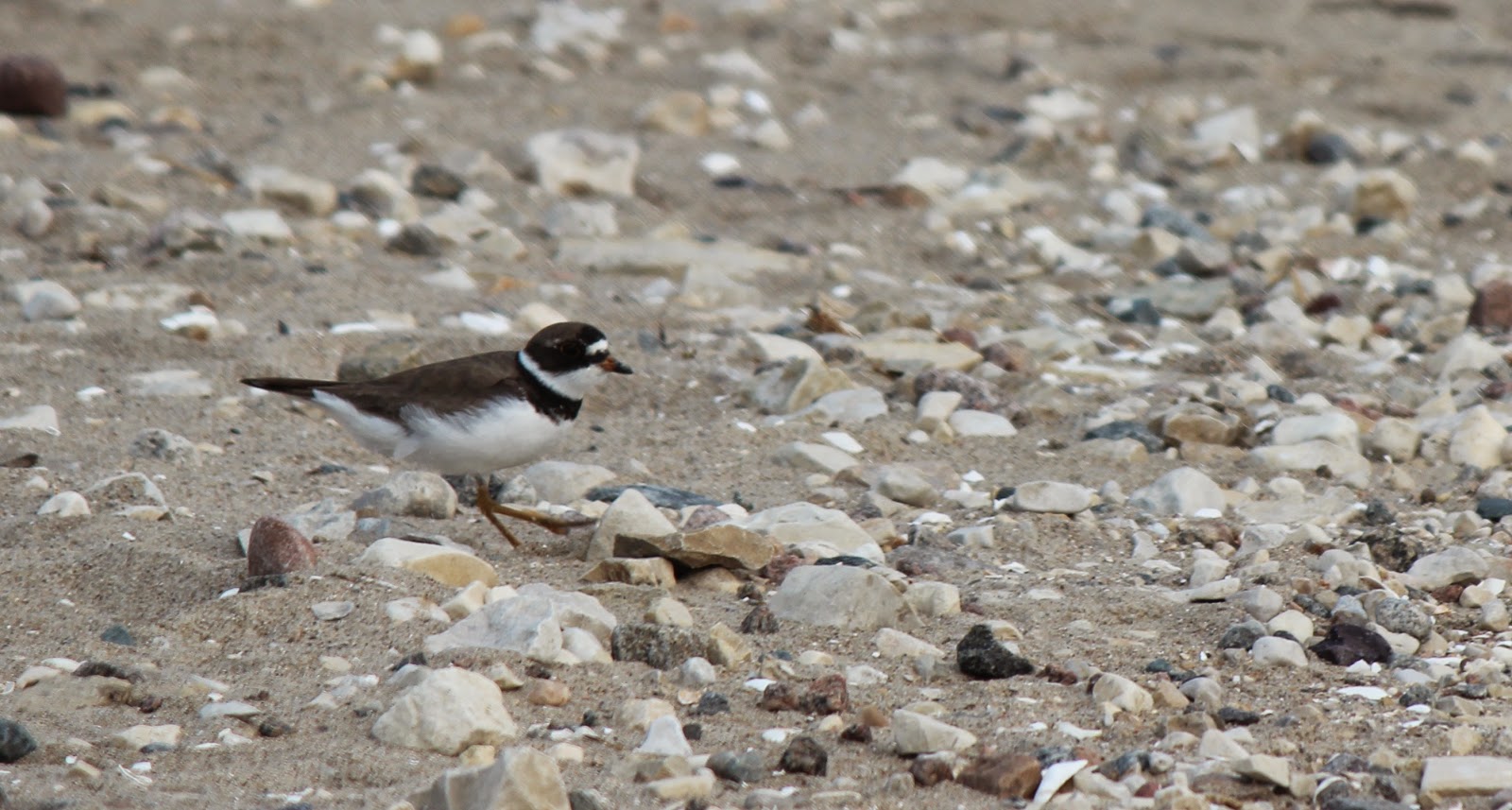 A flock of shorebirds skimmed across the water and flew in front of the group. I got some pictures as they flew by. It wasn't till a few weeks after we got home from Churchill that we identified it, Sanderlings! Also a lifer. Sanderlings is what I had thought when I first saw them.
We saw a helicopter fly with a bundle below, it was a dead polar bear. The bear had been sitting across the river in sight from Cape Merry for a month, it was very old. 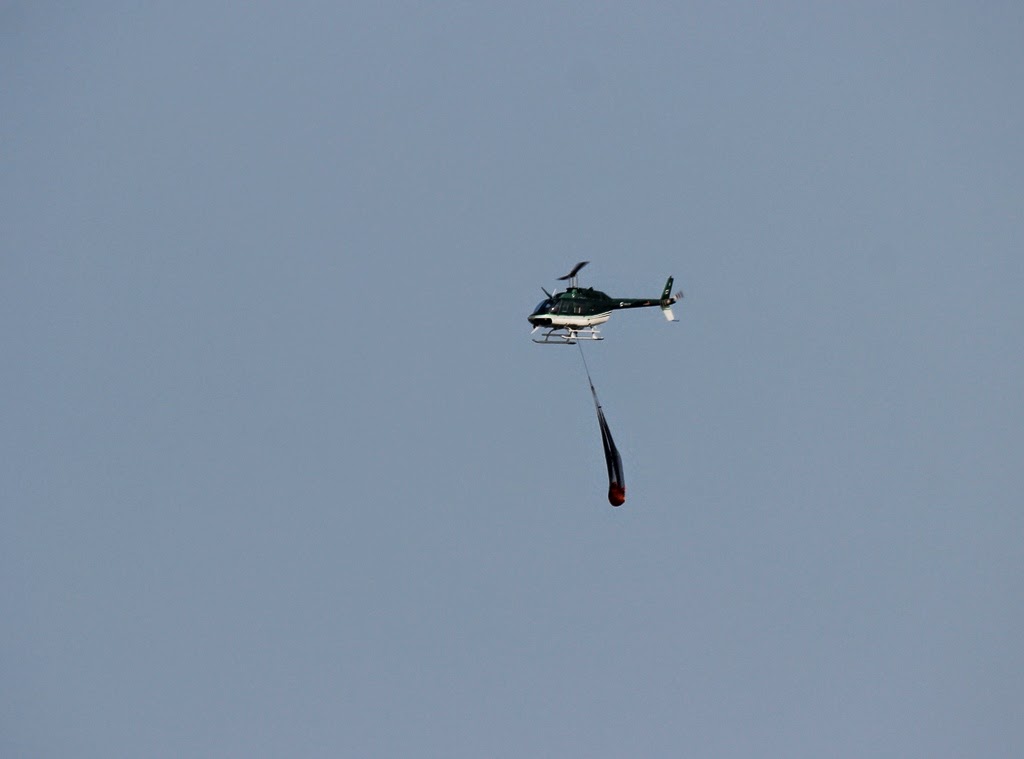 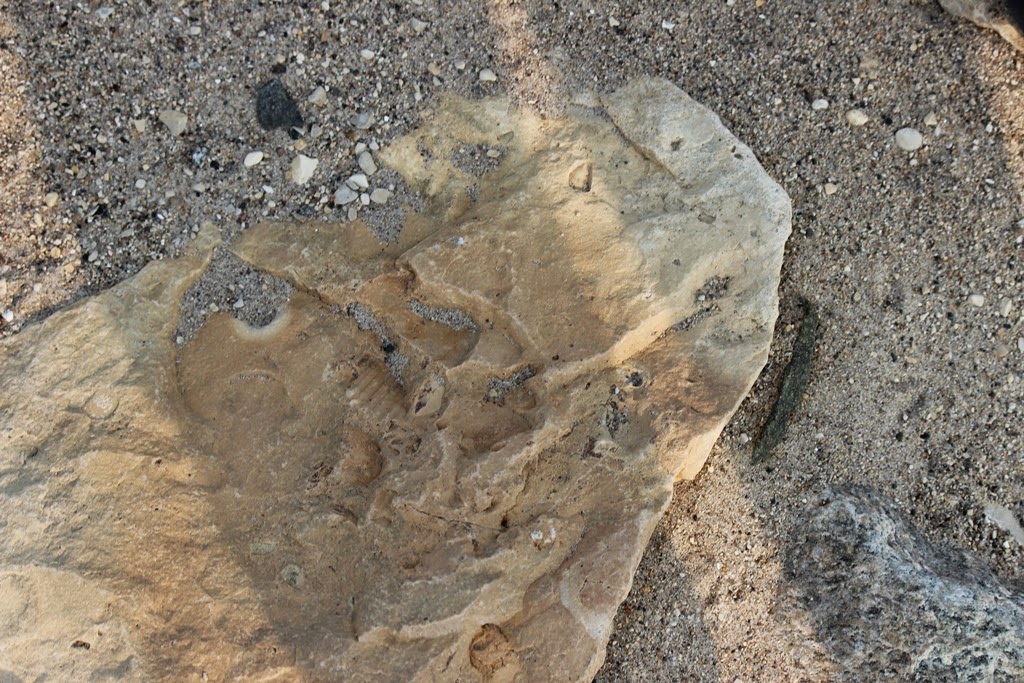 We found some fox and wolf prints, the ones below are wolf prints.
Another jellyfish!
A cool layered rock my sister found 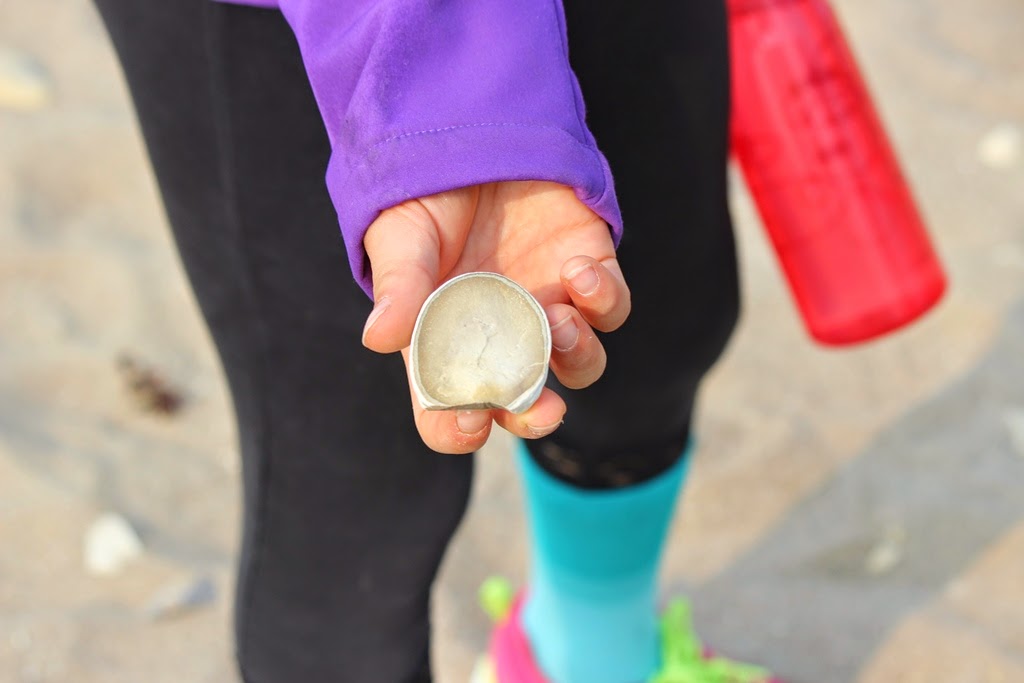 The polar bear watcher on some really cool rock formations. 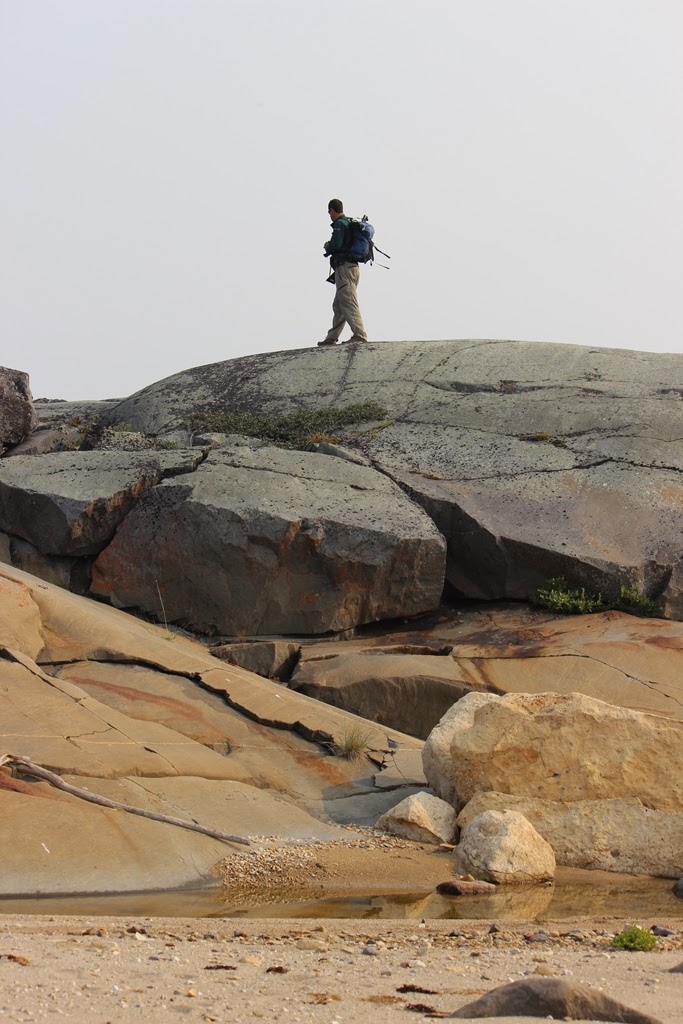 Here's a cool tree. Many of the trees are like this in Churchill. The bottom is very bushy but the top is almost stripped bare except for one side. This happens because in the winter, the harsh winds blow a certain way, allowing only one side of the tree to grow, while the bottom of the tree bushes up because it is in the snow. 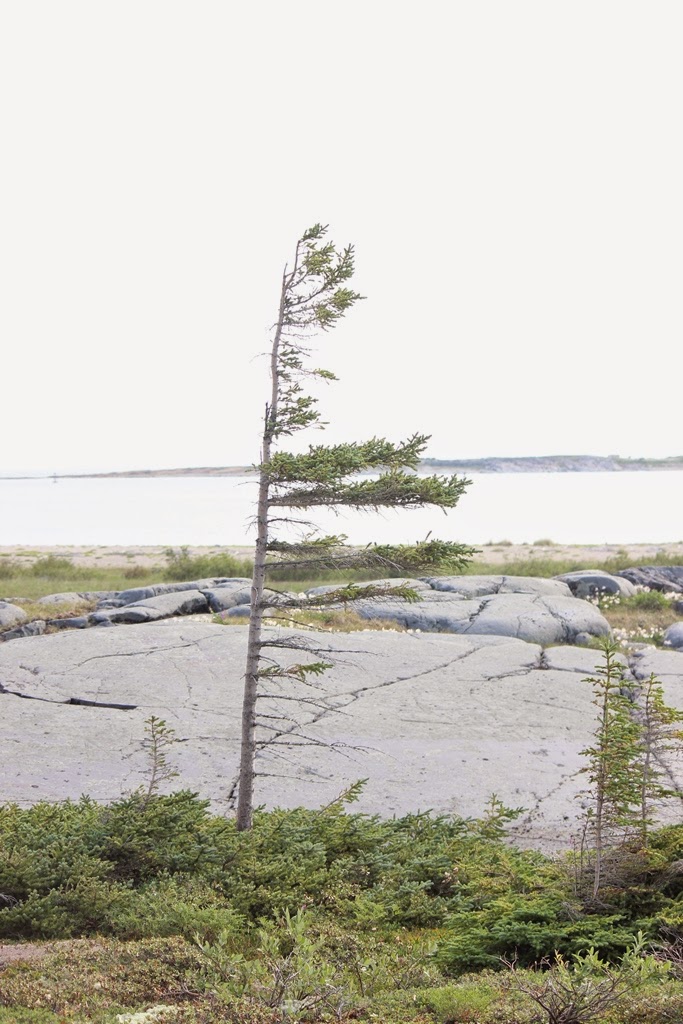 We made it to the fort, and had a little time to explore it, then we went back across the river and we went to the Northern Study Center

As I have said before, my mom and dad met at the study center, because that is where they worked. Except that was the old study center, they built a new one several years ago, a very impressive building and also very environmentally friendly. We also went into the old building, many memories for my parents. There were also two people using a room in the old building as a place for their studies. They were doing respiratory experiments on Dunlin's, Short-billed Dowitchers and Least Sandpipers. Least Sandpiper and Dunlin are new birds for me, but I didn't put them on my list, because they were captive. 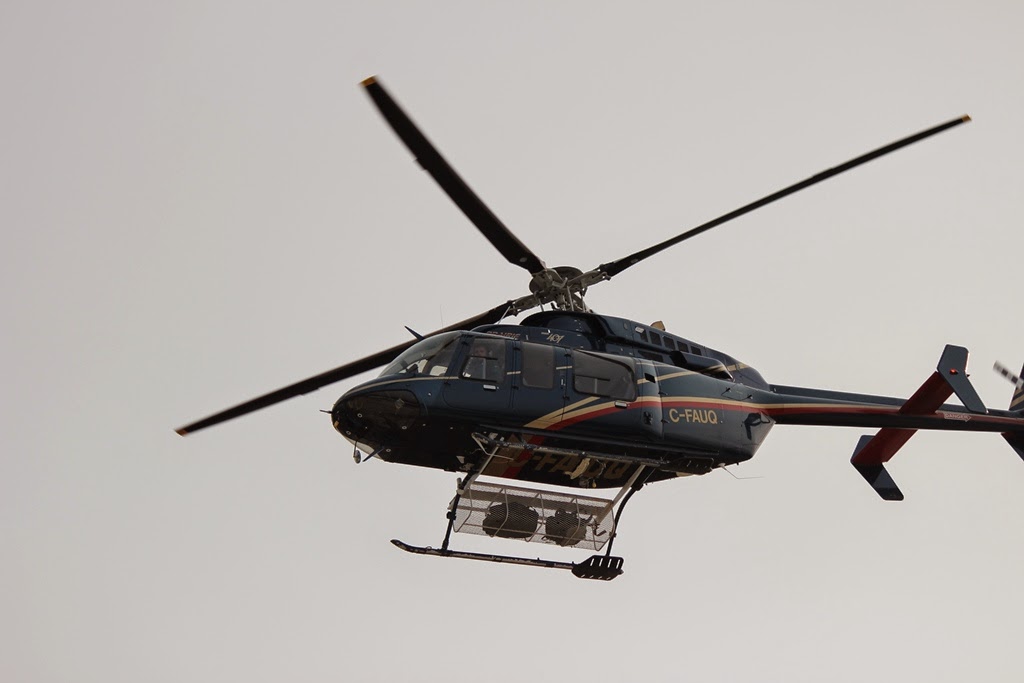 After exploring the old center a bit and the manager showing us around the new building, we drove down to Twin Lakes area, though we didn't make it all the way there, the road was in really rough shape. We were looking for Willow Ptarmigan and Grey Jays, we saw both, plus baby ptarmigans.


Grey Jay! A lifer!
Here's an odd tree, super bushy at the top. 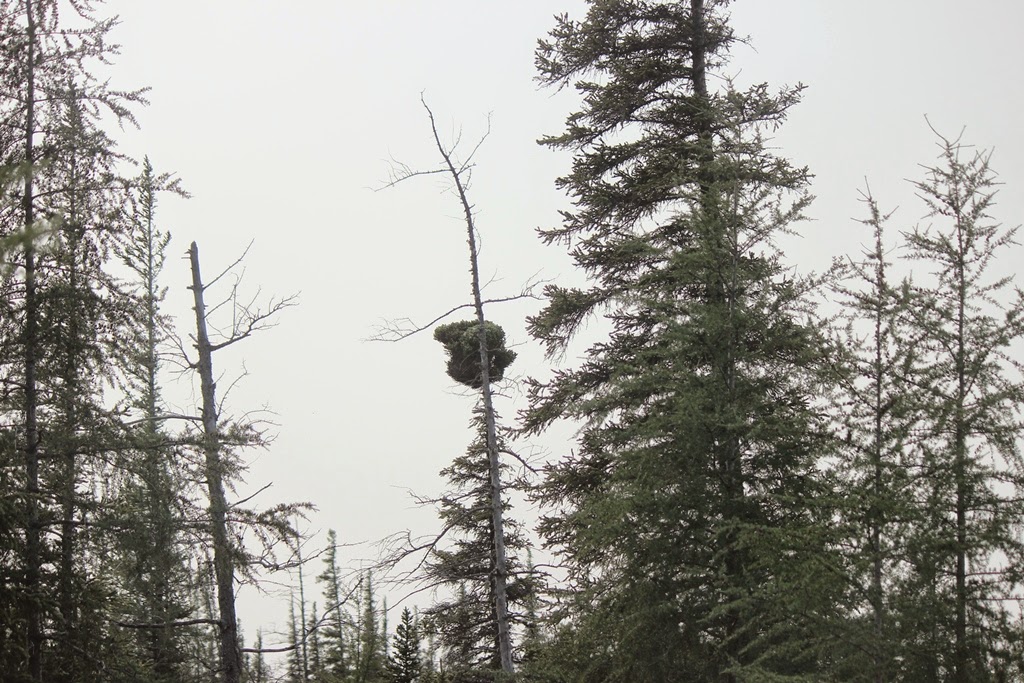 A path through the boggy field to a study site 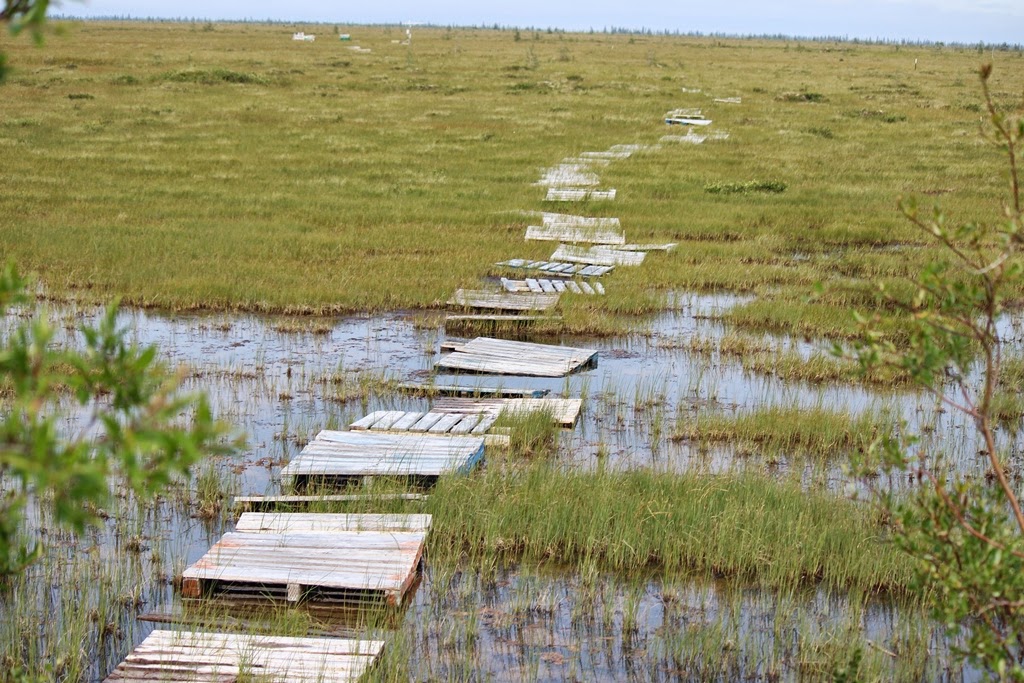 We also saw some redpolls, which was odd for me, because I'm used to seeing them in the winter.

Here's one of the rocket range buildings 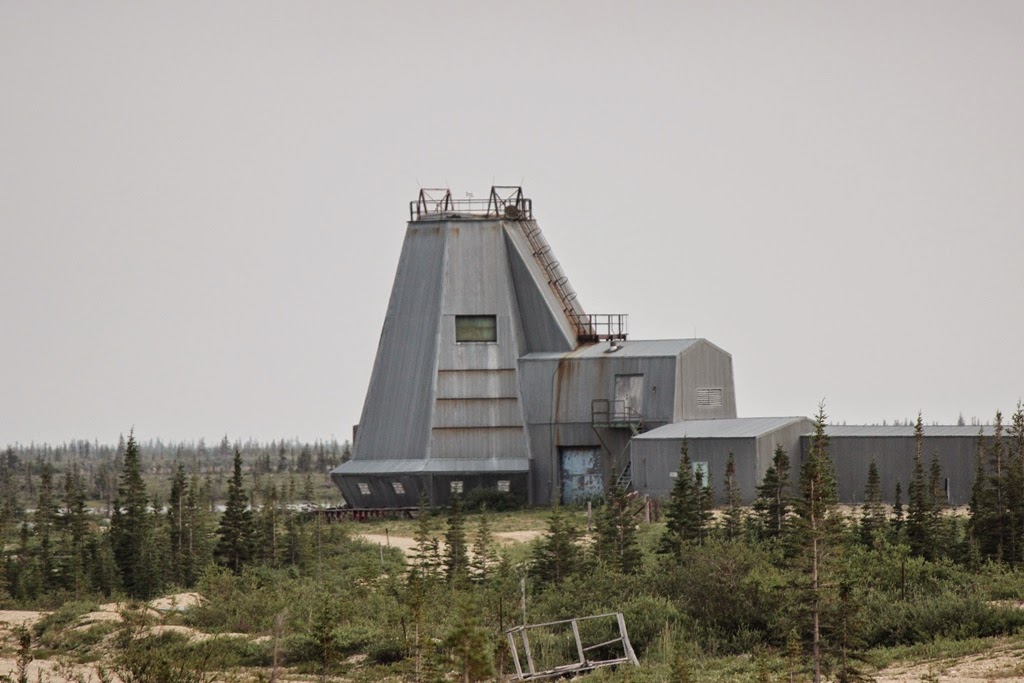 We found a door open and went into one of the rocket range buildings, everything was just left there. It was dark, and kind of creepy, it seemed out of a movie.

The control panel
My dad worked at the rocket range so he remembered a lot of the stuff.
A closet full of poisonous chemicals, it's sad to see everything just left there. 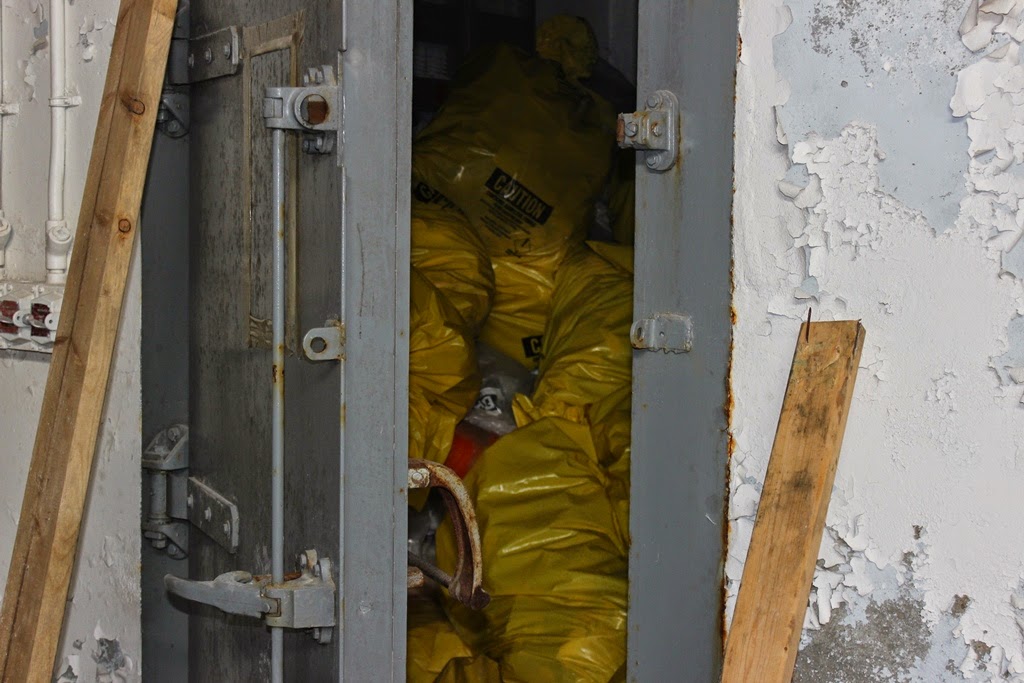 One of the very large tunnels with a rocket carrier in it. 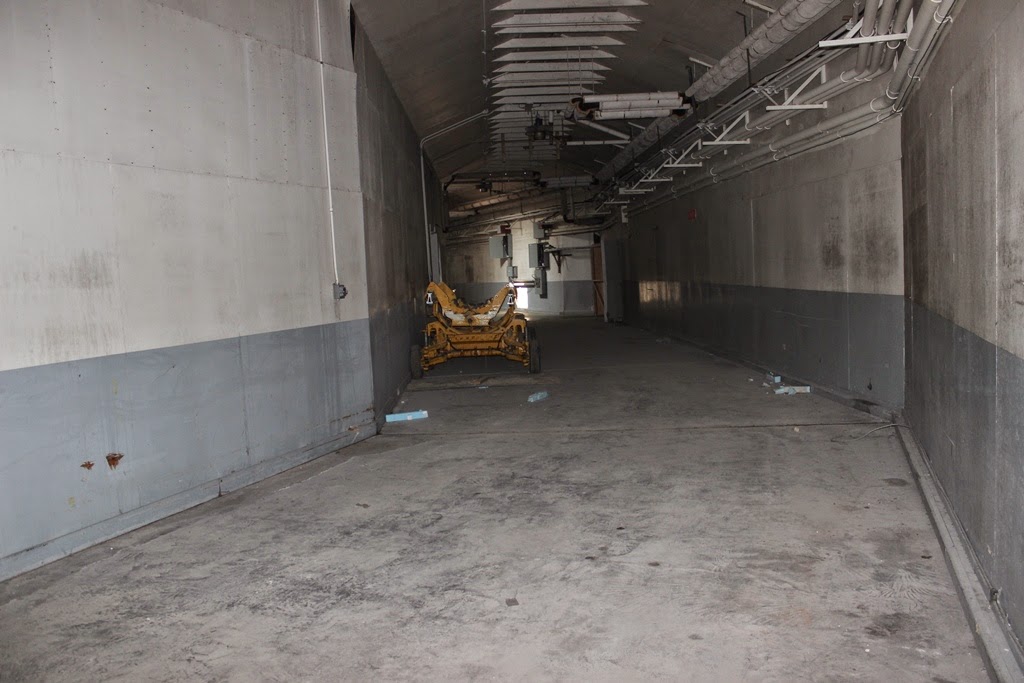 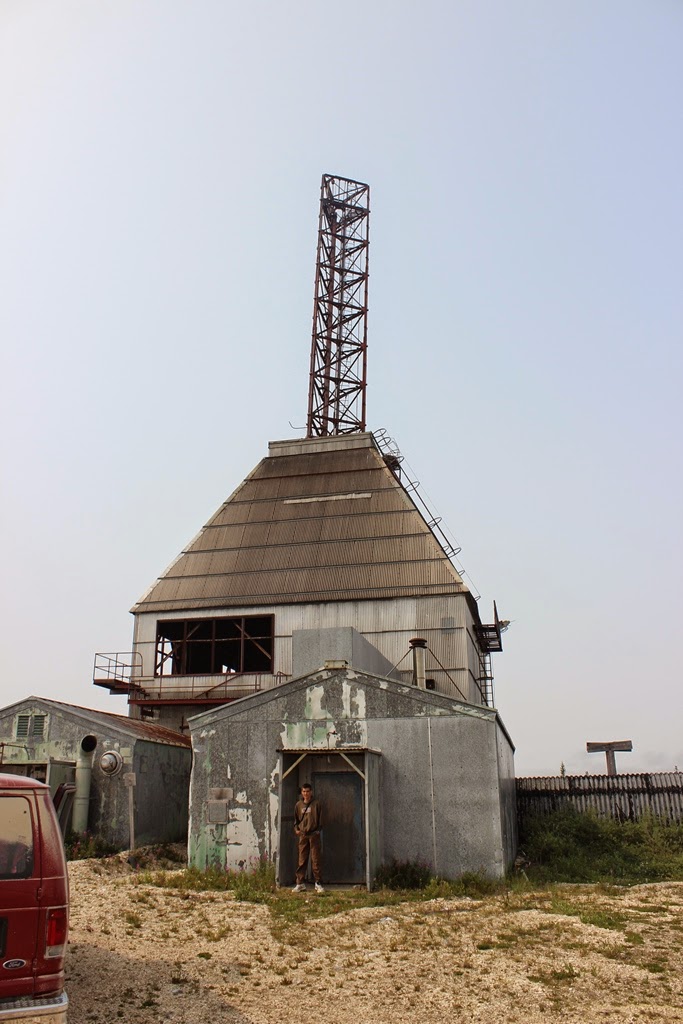 We saw a Bonaparte's Gull in the water, the first one!
The day before we had seen some baby gulls being fed by the parents, but we were in a hurry to get to our mom and dad's friends house for supper, so we couldn't get any good pictures.
The baby being fed, what a beautiful picture! It looks like it is water actually. 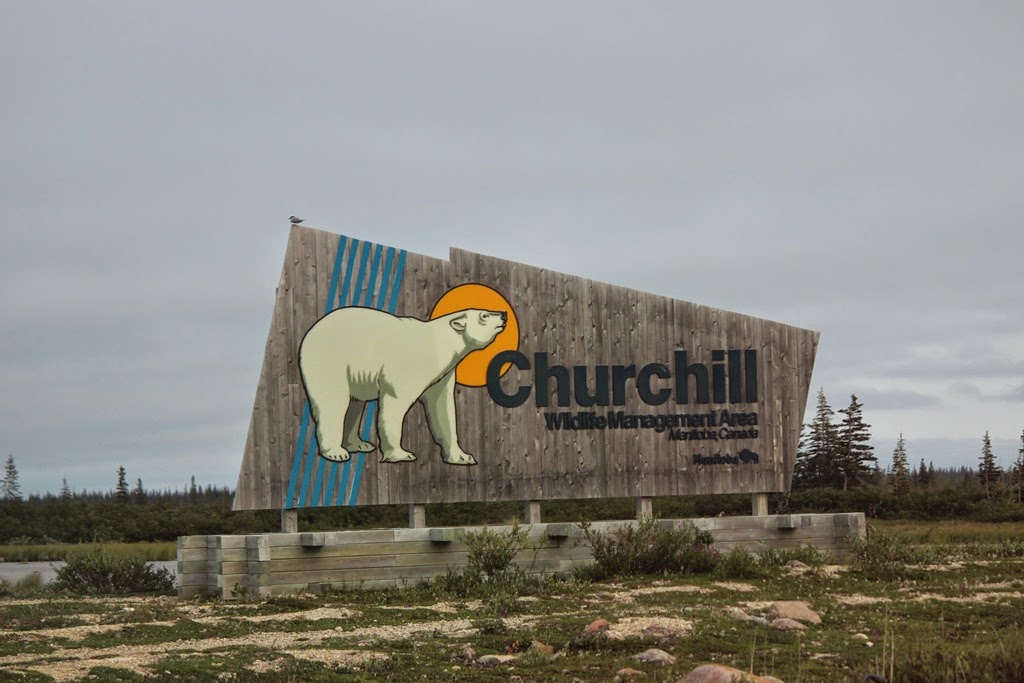 Back at Cape Merry we saw a mother and a cub pacing along.

A cool picture of the sun behind the clouds.

One of the old houses by Cape Merry Here's a truck looking out for bears. 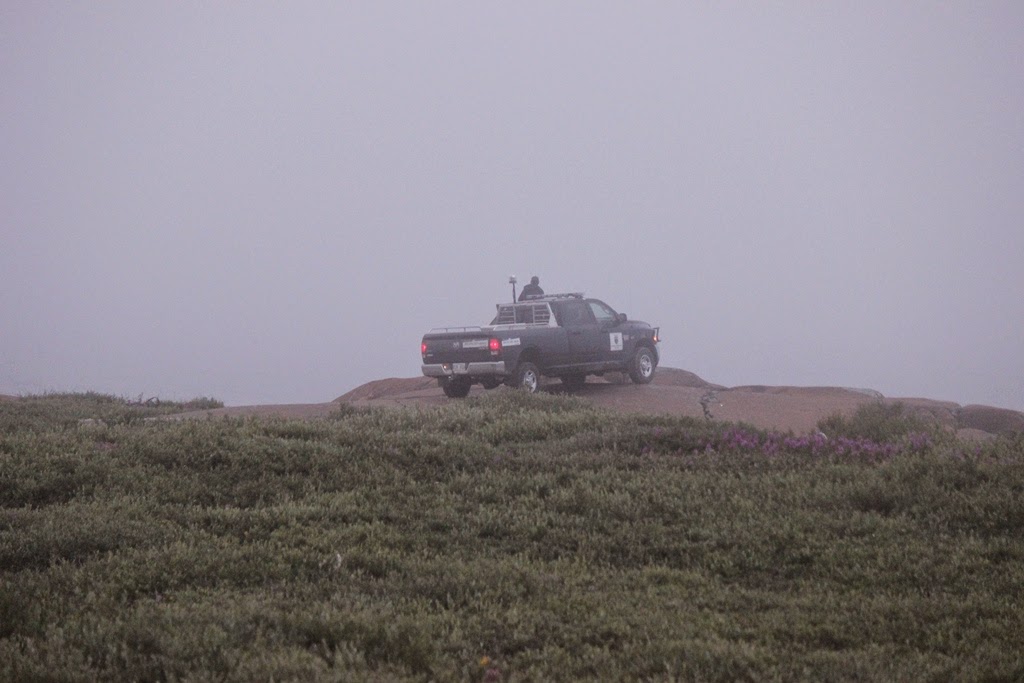 Some really cool sunset pictures I took. I think they were from the day before though.
Beautiful sunset in Churchill to end the day 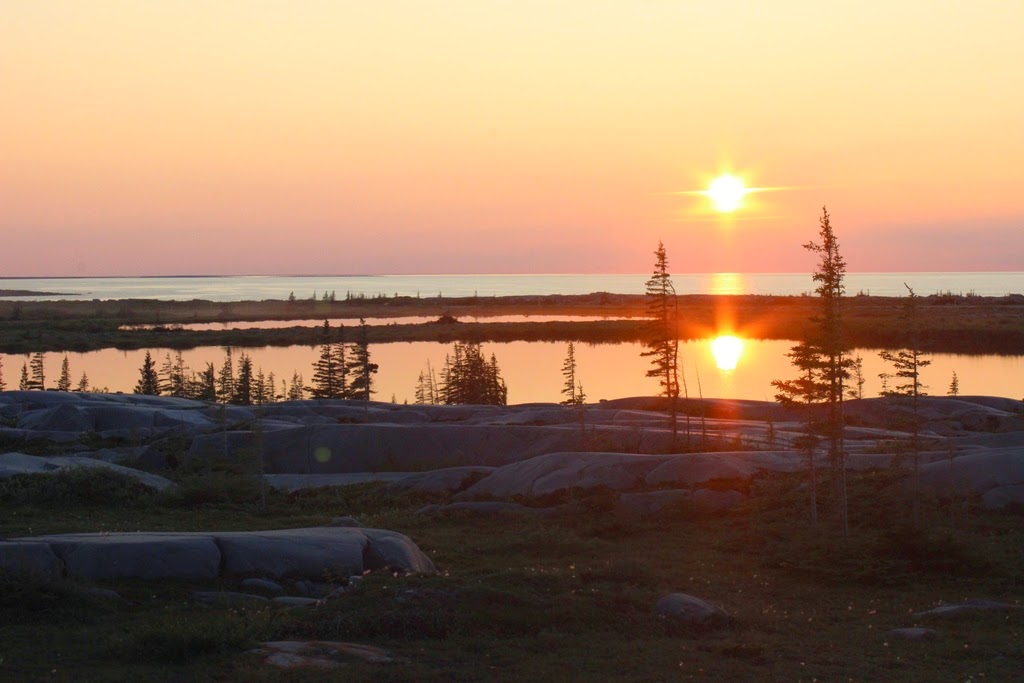 Stay tuned for the next post!
Posted by Josiah Van Egmond at 1:32 PM