I unfortunately have not post many of these lately. Here is a simple photo of  a chickadee from a few weeks ago.


Other Feathers on Fridays:

Birds In Your Back Yard
Posted by Josiah Van Egmond at 10:26 AM

On February 4th we head up to Hecla Island with Christian Artuso to see if we could see some winter birds. It is a two hour drive, and is located on Lake Winnipeg.
We took a lot of photos, and I have not gone through them yet, so I am just going to make a quick post with a few photos for now.

The first notable bird was a Northern Hawk owl that we saw as we crossed the causeway to the island, though it was a good distance away and we didn't get a good picture of that one.

From then on we saw numerous owls, totaling 4 Northern Hawk Owls and 4 Great Grey Owls. We sat in the car watching the Great Grey Owls for a while, waiting for a good photo opportunity. They would take off and fly every once in a while, which made for some great photos.

By looking for 'scaling', that is bark stripped of trees,and listening for tapping, we were able to find a Three Toed Woodpecker. It was a lifer for us! They are very quite elusive, but quite approachable when found. The one we found was pecking on a tree only one foot of the ground, so it made for great pictures. 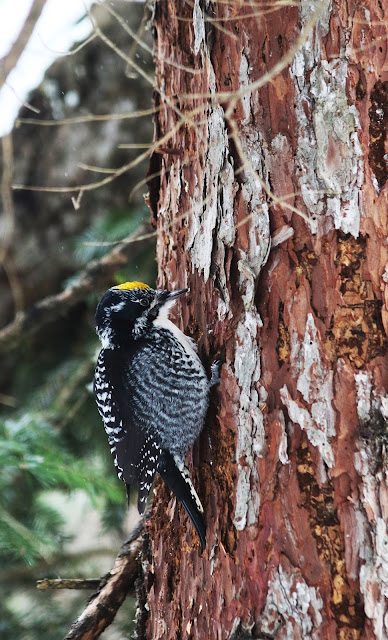 Other birds we saw were grouse, both Ruffed and Sharp-tailed.

As we were sitting watching the owls, I decided I could take some short videos to compile together. Here it is:


I still hope to make another post more fully covering our trip, but it might be a bit before I can process all the photos.

Here's a photo crop from a while ago. Can you guess what that bird is? Leave your guess in the comments.