This is a continuation of Florida posts. This is the second post, the first full day we spent in Florida.

After the lighthouse, we went to a nearby beach. For fun I made this on google maps, so you can get feel for the area:
https://www.google.com/maps/d/edit?mid=zw5OY-QNgfx0.kqp4ETXevD9M&usp=sharing

There was a beach there, with a jetty that extended about 300 m into the ocean, and boulders go out a kilometer to break the waves for boats (I think).
Now for an onslaught of photos, some of the photos are William's, even though they all say Josiah Van Egmond.
Here's a group of Black Skimmers with a few gulls in among them.  There were large groups of terns and skimmers on the beach, 4 lifers right there, Royal Tern, Sandwich Tern, Black Skimmer and Laughing Gull.

These Ruddy Turnstones were about halfway down the jetty.

They gave us a good photoshoot. This picture rather looks like it has a broken neck.
Most of them were standing on one leg.

When William, Matthew and I were out on the jetty, we saw a sea turtle! It was pretty exciting.
Here are the terns. The ones with orange beaks are Royal Terns, the ones with black and yellow-tipped bills are Sandwich terns. It actually took a while to identify them. At first without looking at the bird book, I thought they were Caspian Terns, then after studying them with the bird book (and trying to keep the pages from flipping from the wind) I finally figured out they were Royal and Sandwich.
There is a Laughing Gull in the center of this photo as well, and Black Skimmers in the background.
City across the water. 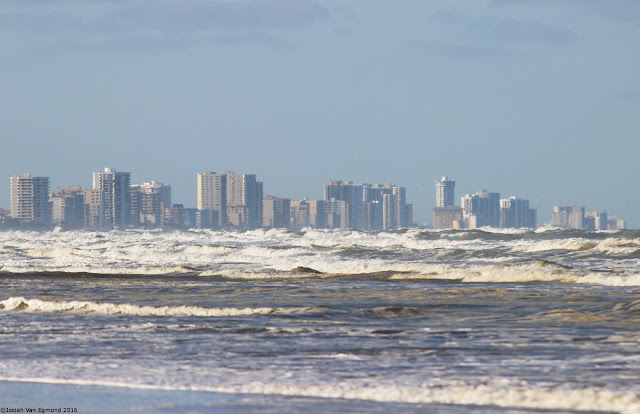 And of course, good ol' Ring-billed Gulls.
And the flock goes up!
There were some tiny shorebirds on the beach, quite friendly, Sanderlings.
This is one of my favorite photos I took there.
SHARKS!! Nope, just dolphins. There was a group of them coming up and down in the water on one side of the jetty, pretty neat. Not in Sea World.. we didn't do any of that sort of stuff, and wild animals we saw (which I much prefer). :)
Don't worry, not a broken neck, just stretching.
The black backs of Black Skimmers


Brown Pelicans were very common, here is a young one.
You can see how much longer the bottom of the beak is than the top, that's because skimmers skim over the water, with its beak scooping up water.
A Brown Pelican landed on a post on the beach, a fantastic photo opportunity, usually they were just flying by or far out in the water.
The Herring Gulls were much bigger than all the other gull, terns and skimmers, they really stood out.

And this photo, one of my favorites! I love Brown Pelicans now, they're such nice birds.
That may have been a photo overdose, but I hope you enjoyed. If you haven't seen the previous post click here
Share if you want and don't share if you don't want, but it will be appreciated if you do! Please comment, I always love getting comments.

Stay tuned for the next post! There's plenty more nice photos to come.
Posted by Josiah Van Egmond at 5:33 PM