This is my third post in my 'Spring has Sprung' series. See my other here.

New year birds continue to be seen here, as well as a few lifers
In one of my walks to the back, I saw something that looked like a duck fly into a tree. At first I thought it was a Mallard, but then of course, only Wood Ducks go in trees. Once I got a good look at it I knew it wasn't a duck, but a Sharp-tailed Grouse! It stayed in the tree for a while when I just stood there taking pictures.
I got a flight shot when I finally moved a bit and was scared off. We saw the grouse for the next couple days. 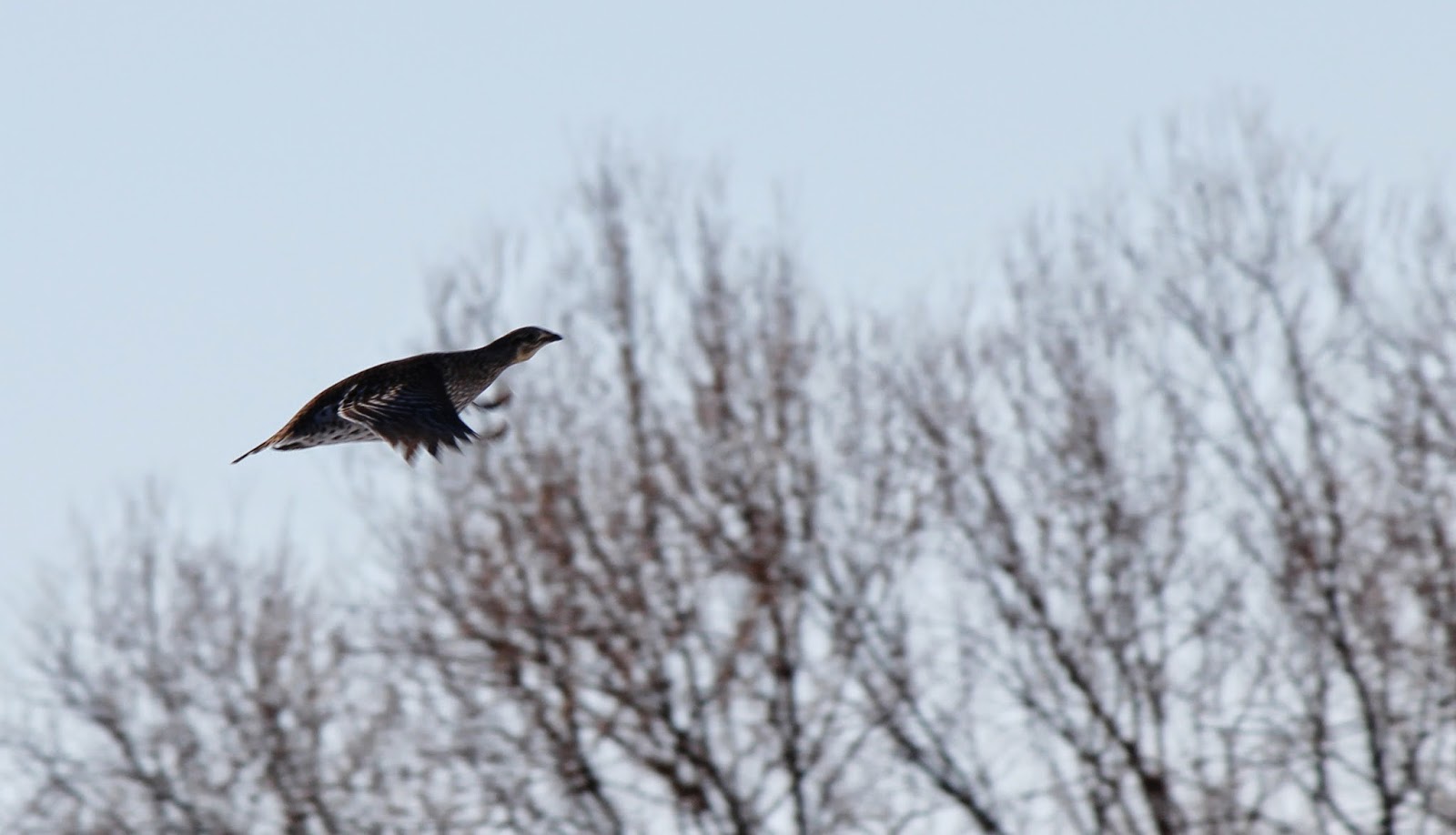 My brother came back from a bike ride and said that he saw some Grey Partridge, which I hadn't seen before. The next day when I was biking around the same spot I saw them fly up, too suddenly for a picture. I used the only picture my brother got of them for a Weekly What Bird recently.

When y and my brother were biking together, we went down a side road, I thought we would see nothing, but I meas wrong. There were a bunch of robins and some starlings, and some Cedar Waxwings, wait... those don't look like Cedar Wacwings. Bohemian Waxwings! A new lifer! They were sitting in a berry tree which gave us some good shots!

The Goldfinches are coming back too, but they've shown up now and then in the winter.
My brother was outback looking for a spot for the kestrel box, and he came back and said he thought he saw a Short-eared Owl. Later we went out looking for it, and we found an owl, not a short-eared, but a long-eared! A new lifer! In fact, we didn't find one of them, but two! It is likely they will nest here as our yard provides suitable habitat and old crows nests that they nest in.

On the way back, we saw a junco, but it looked a bit weird for a junco. We got closer, it was a thrush. I quickly identified it as a Hermit Thrush by it's red tail.
We have went out a couple times to see the owls. I have located there favorite roosting trees, as every time we went out they have been there. I went out one time, and not five feet in front of me it flew away, they are incredibly camouflaged.
As our Birds of Canada book says:

"A master of disguise and illusion, the Long-eared Owl blends into its shady, wooded background by flattening its feathers and assuming a thin, vertical form."

Wow! I would have never found it if it hadn't been for the other one that flew away, revealing their presence. I got to a better spot to get some pictures of it's whole body. They are a lot smaller than I thought, but when they fly they look big. They are really thin and tall, so I think it makes them look small but they have long wings.
I did a sketch of a Long-eared Owl from our Birds of Canada book


Before I saw one for real I always thought they looked just about the same as Great-horned Owls and were the same size, I know better now.

Stay tuned for the last part! (unless more Spring birds show up in the next few days)

Thanks to Prairie Birder's and her FoF prompt
Posted by Josiah Van Egmond at 6:00 AM

Email ThisBlogThis!Share to TwitterShare to FacebookShare to Pinterest
Labels: spring has sprung