Parkland Mews is a falconry and birds of prey education centre. They raise, train and release Peregrine Falcons. The link to the website is http://www.parklandmews.com . Our home school group went there in early spring. Robert Wheeldon, the owner, had said I can come back in the summer to help him out a bit. However because I was out of town a lot in the summer and he was so busy with raising the falcons he didn't have time until early fall. I then went to volunteer three times, each two weeks apart.

Robert raises quail to feed the falcons and to offset his costs he sells the quail eggs, a delicacy in some circles. The first time I volunteered I helped move around the quail from cage to cage. We took some of the quail to the mews (mews are the rooms that the falcons are kept in) and put them in to feed the falcons. At the end of my time there I went into one of the mews with a glove and a dead quail on my hand. The Peregrine Falcon flew to my hand and took the quail and began eating it.

He asked me to write about hacking, and bring it to him next time. Hacking is a peregrine release and falconry technique. Falcons are placed in a hack box a couple weeks before fledge period. After 5-10 days, the hack box is opened so the young falcons have freedom to go out of the box. The falcons can’t yet fly but can exercise their wings. Usually after about 3 days the falcons take their first flight, a couple dozen feet. They begin to fly farther. The falcons learn to self-hunt but are still fed. After the hacking period they are either released into the wild or recaptured for falconry.

The second time I volunteered, I scrubbed a peregrine bath tub and we filled it with water and put it in the peregrine's mew. Rob and I sat on the other side of it and took pictures as it bathed. He gave me a book to read for a bit. The book was called Varda, the flight of a falcon. I read a couple chapters until one of Rob's students came and showed me one of the falcons. He demonstrated a lure with a dead quail on the end. Then he gave me a glove and I carried the falcon back to it's mew. He showed me how to pick up the falcon and carry it. This time Rob told me to write on how peregrines bath to exercise my observation skills. The peregrine splashed around in the water and fluffed its feathers then spread its wings. It put its head in the water and rolled it side to side. It flew up to a perch and spread its tail feathers wide, I think to dry them. 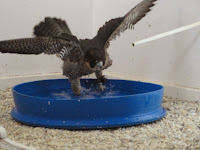 The third time I went to Parkland Mews, Rob told me to skip a bit of the book so I could finish it off as this would be our last session for the year. He didn't really have anything for me to do so I read some of the book and took some pictures of the falcons. Rob gave us a half of an ice cream pail of quail eggs which tasted great boiled. I have been cooking them up in different ways and doing taste tests. Quail eggs have 3-4 times the nutritional value of chicken eggs, even though they are almost 3 times as small. Quail eggs are a specialty for the Chinese so he sells them to Chinese restaurants.


Thank you Rob for spending the time with me!!! It was great!!!