Several days ago we went to Kenora for camping and my mom also sold flowers at a market there.
William is currently in Alberta for a friend's graduation so he took our DLSR and I was stuck with our point and shoot. I was actually surprised to find out it can take pretty decent photos.

We borrowed two canoes from friends and strapped them onto our tent trailer and head out. Our plan was to do a bunch of canoeing.
We arrived there late and it was after midnight by the time we set up the trailer.

The next morning near the farmer's market we saw these deer leisurely crossing the road. There was a line up of cars behind them on the bridge but they didn't seem to mind, they walked along in the center of the lake at a slow pace. 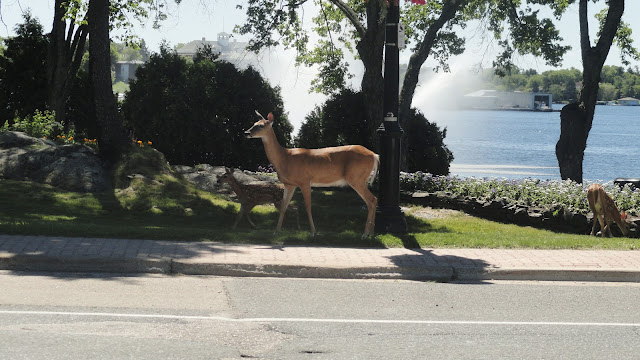 The giant white tent-dome is where the farmer's market took place.
Later that day we went for a pleasant canoe near the campground. We found our way into a peaceful little cove (I named it Stillwater Cove because of the absolutely still water) with some tall cliffs (named them Juniper Cliffs).
There were several turtles basking on this rock.
We found a Great Blue Heron along the shore among the reeds.
The next day we planned to go for a longer canoe. We started at 12 and began canoeing down the Winnipeg River which is right by Lake of the Woods. Along the river we found this nest with some young Bald Eagles!


We spotted a very cool tunnel through the rock. There is a railway going over it so we figured they made it when the constructed the railway.
We paddled through the tunnel and on the other side it led to Mink Bay, a small bay now only connected to the river by this outlet.
This is what we saw as we emerged from the tunnel: 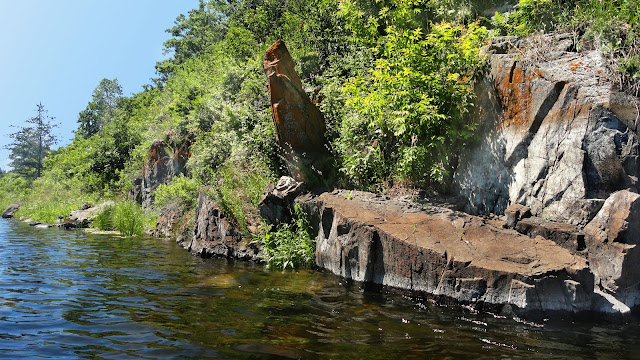 More paddling and we stopped for lunch at this lovely little point. It is just a tiny peninsula, surrounded by lake, bushes and cliffs.
There was some very cool rocks there, such as this one. 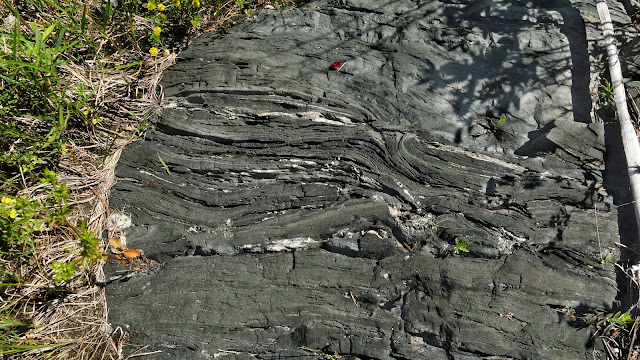 We canoed for the rest of the day and in the whole trip we paddled a total of 26 km.
Here's a picture of me and Matthew (my twin brother beneath a cliff. I'm in the back of the canoe.

The next morning a Bald Eagle landed in a tree very near to our campsite so I was able to snap some nice shots.

It was a very fun and pleasant trip and we saw some great wildlife. I am very much looking forward to more canoeing.

I've made a map so you can get a feeling for where we were canoeing:
https://drive.google.com/open?id=1-Qg1GBe_-U7fc4LMGtL7KCTpxhI&usp=sharing